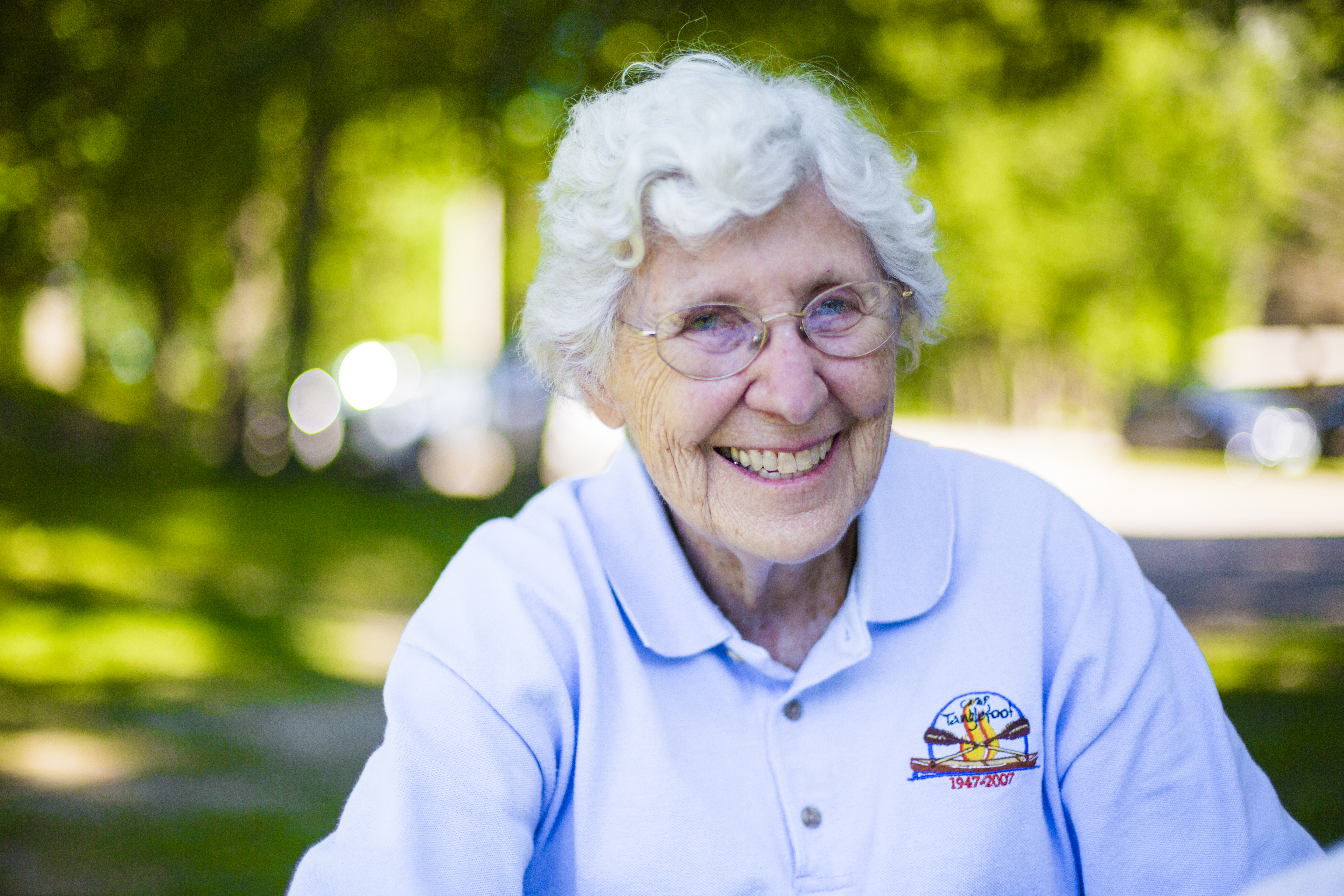 The term “long time Girl Scout” describes a lot when it comes to Joan Eness, considering she’s been a Girl Scout for over 80 years.

Yes, that’s right – 80 years. Eness received her Brownie wings in 1939 in northern Iowa where she was born and raised. She remained in Girl Scouts until completion as a Senior, and earned her Curved Bar award in 1944, the highest Girl Scout award at that time. To earn the Curved Bar, a Girl scout had to earn four proficiency badges in areas such as agriculture, ambassador, and business woman. Eness fondly remembers having her photo in the local newspaper as recognition for the award.

In 1947, she joined the staff at Camp Gaywood (now Camp Tanglefoot) on Clear Lake for its inaugural summer and eventually worked up to Camp Program Director. Eness shares memories of arriving that very first year on a Wednesday and preparing as quickly as they could for campers to arrive that weekend. A farmhouse was turned into the dining hall, they used piles of straw to make mattresses, they had army surplus steel cots, and just three row boats on the water. As a frequent visitor to Camp Tanglefoot still today, Eness says she couldn’t have imagined camp looking the way it does now back in 1947.

After many years, Eness moved on to work as a Field Director for 9 years for North Iowa Girl Scouts; she trained troop leaders, worked with Senior Girl Scouts, and oversaw day camps.

“You learn valuable experiences that you can apply to any job that you’re in – housewife, mother, working in a store. It’s getting along with people and deciding who is best equipped to do what,” Eness said when asked what she’s learned in her over 80 years of Girl Scouting.

Eness, now 90 years old, remains involved in Girl Scouts as a constant donor and supporter of Camp Tanglefoot. She visits each year for the camp’s final campfire where Girl Scouts end the summer with songs around the fire and a wishing boat. She’s a familiar face and a warm smile on the shore of Clear Lake, at the heart of Camp Tanglefoot.

“It’s unbelievable how the friendships you make in Girl Scouting become a part of your life and your history,” she said.

Do you know a long-time Girl Scout with a special story? Email philanthropy@gsiowa.org to share more – we love to learn about fellow Girl Scout sisters!