Martha Krone – From Brownie to Board Member 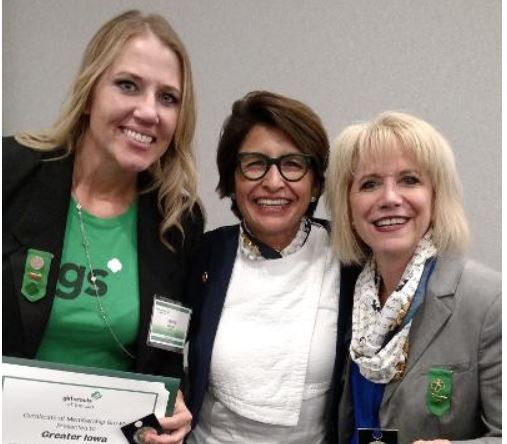 “The values and mission of Girl Scouts, from what Juliette Gordon Low envisioned to today, have not changed. The manner in how they are shared and instilled in girls continues to evolve to be relevant to young women of each generation,” said long-time Girl Scout Martha Krone.

Martha Krone has been a Girl Scout nearly her whole life. She’s seen Girl Scouting grow, change, and adapt all while maintaining the mission of empowering girls. Now a seasoned Board Member, Krone started her Girl Scout journey as a Brownie in northern Iowa. Over the years, she worked her way up to Senior Girl Scout, and earned her First Class Award (equivalent to Gold Award today). Her Girl Scout story doesn’t stop there because years later, in 1995, Krone began serving on her first Girl Scout Board.

“One of my troop leaders in Mason City, Bev Moeller, moved to Sioux City….after I married and moved to Sioux City, Bev invited me to become a Sioux Trails Council Board Member. I served as President of that Board, then served as Co-Chair of the Council Realignment Committee, when Girl Scouts of Greater Iowa (GSGI) was formed,” said Krone.

Since then, she’s served on the GSGI Board in various capacities, including President at one time. The GSGI Board of Directors is a group of strategic-thinking professionals who volunteer their time to help guide the business of the council. Comprised of men and women from across Greater Iowa, they’re committed, dynamic, and dedicated to building the Girl Scout Movement.

“As a board member, I want to ensure the Council has adequate resources to offer the opportunities of Girl Scouting to girls far into the future,” said Krone.

Opportunities like the ones she remembers of her time as a Girl Scout fondly.

“As a Girl Scout there are so many fun memories; the community programs that our Troop Leader Joyce Hanes enthusiastically lead us to create. We had a theme and she found a part for all of us in the programs. The goal was to earn badges, leadership, and problem-solving skills but us girls had the added benefits of having fun while making new friends,” said Krone.

And those that have continued into her adulthood.

“Hearing the history of camp [Tanglefoot] and sharing stories around campfires formed special bonds with fellow Girl Scouts [as a child]. It was an awesome experience to attend another "final campfire" as an adult board member, which evoked the same emotions as when I was camper,” she said.

For Krone, it all comes back to the core mission of Girl Scouts.

“Girl Scouts provides such a positive impact to girls in the personal skills developed, the memories and friendships made, and the positive role models in their lives. It offers a safe haven to take risks and be themselves and to get to know themselves that is not replicated in other organizations,” said Krone.

Currently a member at large, Krone serves along side 14 other GSGI Board Members. To learn more about GSGI’s Board of Directors and GSGI’s Associate Board, visit our website.